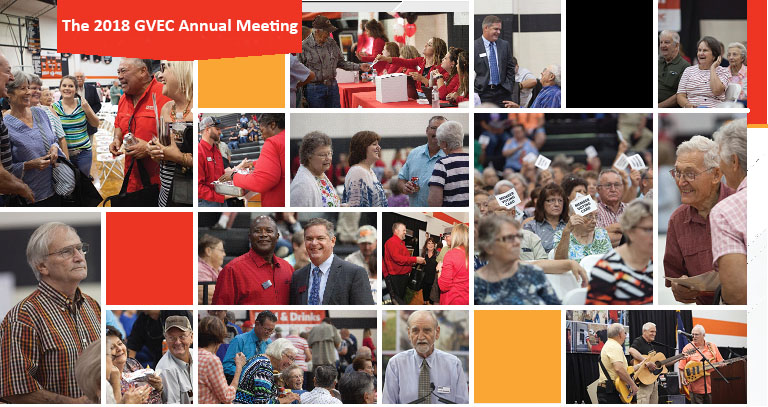 In Celebration of Cooperative Values

GVEC held its 2018 Annual Meeting June 22 at the Gonzales High School Special Events Center. In all, 1,168 members participated either in person or by proxy. Attendees celebrated their cooperative’s perseverance, resilience and continued financial strength alongside GVEC leadership and numerous other GVEC personnel.

Additionally, the membership elected Mr. Gary Birdwell to replace outgoing District 9 Director Dr. Tom DeKunder. In early 2018, Dr. DeKunder announced his retirement, indicating he would step down after his current term. Mr. Birdwell will serve a standard three-year term as Director of District 9.

This year’s Annual Meeting video, titled Resilient. Diversified. Strong., underscored the evening’s theme. The impact of Hurricane Harvey on GVEC and its membership, as well as the loss of two beloved employees, figured prominently into the 20-minute presentation. GVEC General Manager Darren Schauer praised GVEC’s preparedness for Harvey, expressing great pride in the Cooperative’s response to a storm he described as the “largest natural disaster GVEC has faced in its 80-year history.”

Board President Lewis Borgfeld agreed, adding that, although Harvey was both historic and extreme, GVEC and its personnel met the challenge confidently thanks to extensive, decades-long planning and a deep spirit of cohesion and teamwork.

Chief Operating Officer Sean Alvarez praised GVEC personnel as “great employees” who showed amazing passion for “serving and restoring power or internet services” throughout Harvey. Alvarez further noted that the key to successfully withstanding and recovering from Harvey was the planning and designing of “a strong, resilient infrastructure over the years.”

OTHER TOPICS DISCUSSED IN THE ANNUAL MEETING VIDEO:

• The completion of over 20 miles of core network fiber infrastructure in 2017, helping extend and maintain a reliable, resilient electric grid, while laying groundwork for future fiber internet expansion
• GVEC’s continued push to grow beyond electric delivery through the expansion of internet and
beyond the meter services such as AC/heating sales, maintenance and repair, solar panel sales and installation, and electrician services
• GVEC’s $10 million investment in 2017 to expand high-speed Fiber to the Home internet, adding 5,000 additional passings, for a total of 8,000, with another 4,000 to be added in 2018
• Community initiatives, economic development activities and the 2017 financial report

The presentation of the 2018 GVEC Public Service Awards (PSA) provided some of the evening’s most special moments. GVEC introduced the award in 1986 as a way to recognize people, businesses and organizations who have provided consistent, unselfish and considerable service to their communities and to the people around them. In celebrating GVEC’s 75th birthday in 2013, the Cooperative added the second of its twin Public Service Awards, guaranteeing yearly recognition to both an individual and an organization/business. 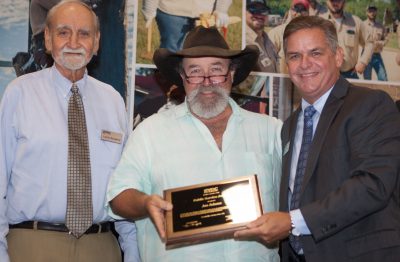 Joe Adams received 2018’s individual PSA for his long public service in Cuero. For over three decades, Mr. Adams has been a pillar of service-to-community, with Cindy, his wife of over 35 years, always nearby to lend support. He has served on the boards of numerous local organizations, including the Cuero ISD Education Foundation, the Cuero Youth Livestock Show Association, the Brahma Breeder Association and the Go Texas Committee. He has also donated his talents as an auctioneer to numerous worthwhile organizations. 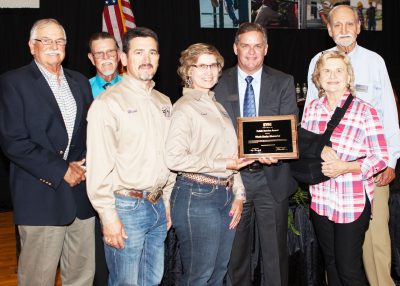 The PSA for outstanding organizational service went to the Wade Busby Memorial (WBM), which was founded in 2005 following the untimely death of its namesake. During his short life, Mr. Busby was passionate about 4-H and FFA. He strongly believed there are many valuable, life-long lessons to be learned and many cherished family memories to be made from exhibiting livestock.

Thanks to the persistence of a core group of volunteers, including Mark Cerda, Busby’s best friend, the Wade Busby Memorial has enjoyed remarkable growth during its 13 years. It has empowered literally thousands of local students to pursue careers in agriculture—the very lifeblood of GVEC’s rural service area. In conferring the award, Mr. Schauer commended the WBM for “…transforming Wade’s memory into a legacy that makes the Guadalupe Valley a better place to live—now and for many years to come.”

For More Information on the 2018 GVEC Annual Meeting