Are Y’all Ready to Crawl? 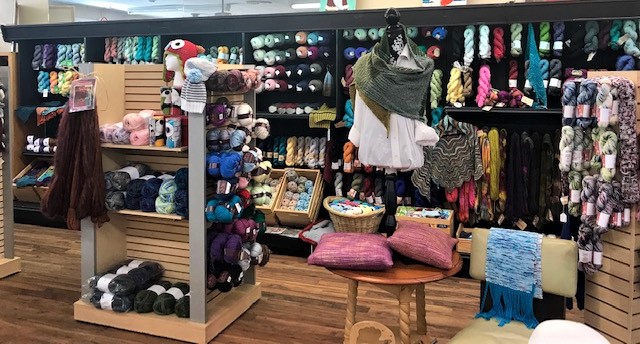 The Best Little Yarn Crawl in Texas is October 11-20!

Knitters, crochet crafters and fiber fanatics throughout the area are crawling with excitement. Why? Because it’s almost time for the 13th annual Best Little Yarn Crawl in Texas. Every October, creative crafters crawl their way through 16 yarn shops around Central Texas over 10 thrilling, thread-filled days!

Approximately 2,000 yarn enthusiasts weave their way through the Crawl each year, making it one of the largest in the country. While similar events range from one or two days, the Best Little Yarn Crawl in Texas has more shops and area to cover. To make completing the Crawl possible, organizers limited the area of the Crawl to an 85-mile radius around the State Capitol in Austin. Any already participating shops outside this boundary were grandfathered in, allowing them to still be part of the event. Fiber fanatics from as far as New York and even Canada have slipped on down to the Texas Hill Country for this artistic adventure.

According to Melissa Sternberg, owner of Gauge in Austin and board president of The Best Little Yarn Crawl in Texas, the event came from humble beginnings. There were originally fewer than 5 shops on the Crawl’s route, and they were visited over a weekend. The number of participants was manageable enough to be bussed from shop-to-shop. Sternberg attributes the Crawl’s growth mainly to word of mouth. “Word spreads pretty quickly through the yarn and knitting community, and the Crawl started to become really popular,” said Sternberg.

Suzanne Middlebrooks is the owner of Hill Country Weavers, one of the original shops on the tour. She says that the idea of the Crawl was to gain exposure for the shops, and by the third year, quite a few more stores had joined the fiber-fest. She, like Sternberg, also credits this growth to Texas having one of the strongest fiber communities—a startling fact to some. “People are surprised we knit in Texas,” said Middlebrooks. “Our weather is not conducive to wearing sweaters, but we have such an active knitting community.”

The Best Little Yarn Crawl in Texas is formatted as a game. Participants purchase a “passport” and receive a map and tote bag, which not only comes in handy as they shop their way through the Crawl, but also as a place to pin commemorative buttons gathered from each shop. Patrons also get the opportunity to meet designer dyers and indie artists at the shops.

At each store, crafty crawlers receive two free patterns, enter to win daily door prizes and get their passports stamped. Passports are turned in at the last shop visited on the final day of the event. Those who have spun their way through at least 6, 11 or all 16 shops are entered to win grand prizes.

One of the shops included on the Crawl is Seguin’s You’re So Crafty, owned by Best Little Yarn Crawl in Texas board member Dana Hall. The shop, which offers walk-in crafting activities featuring yarn and fiber, as well as other arts and crafts mediums year-round, finds itself very busy during the 10-day tour. It’s so busy, in fact, that Hall herself has never completed the Crawl.

Although her shop gets exposure from being featured on the Crawl, another reason Hall is proud to participate is to show off Seguin. People, who may have otherwise never visited the town, flock to the area. And though they may only make a quick stop while looping their way through the Crawl, “They drive through our area and may have not before. They may want to come back,” Hall said.

When asked what her favorite part of the Crawl is, Hall said, “I like to hear people talk about how beautiful Seguin is and promote the area. I also enjoy seeing some of the familiar faces each year. There is a comradery.”

Run, Don’t Walk, to the Crawl!

If you’re crazy about cotton, wild about wool, yearning for yarn or fervent about fiber, check out the Best Little Yarn Crawl in Texas. More information, such as a list of participating shops, map of locations and how to join the fun, can be found at thebestlittleyarncrawlintexas.com.