Delivering for Community: Meals on Wheels and GVEC 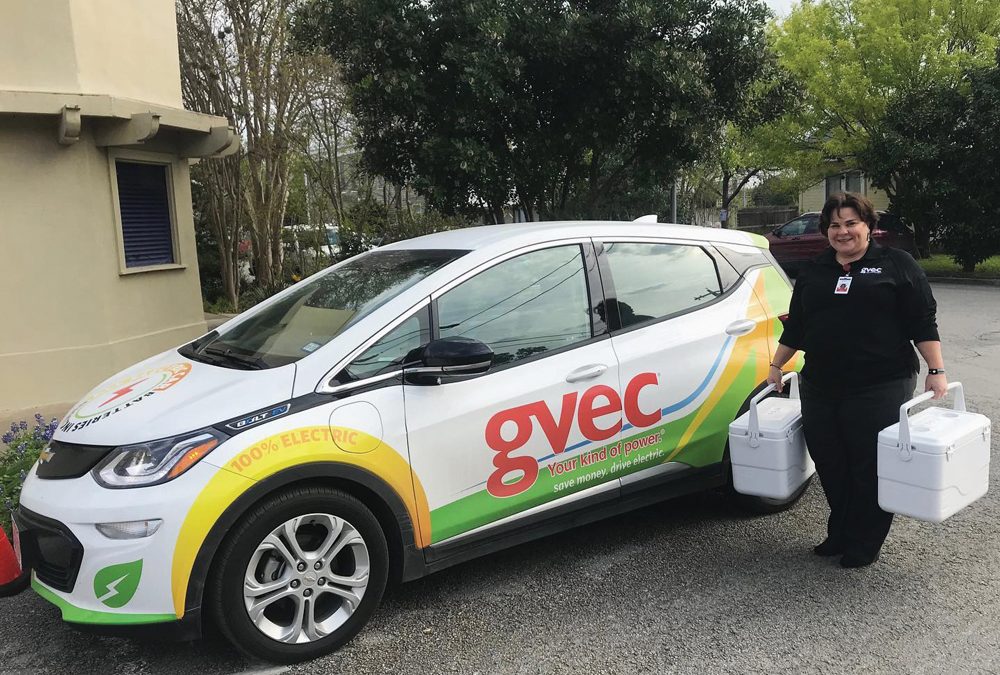 In 2018, GVEC put wheels to the road in service to community by volunteering to help deliver Meals on Wheels within our service territory as the program transitioned to a new local coordinator. Pictured is GVEC Accountant Julie Stock standing beside Sparky the EV. Stock was assisting Community Relations Representative Kasie Tankersley make lunchtime deliveries during one of her routes. Sparky participated in every GVEC Meals on Wheels delivery.

When the Community Council of South Central Texas (CCSCT) ended its participation in Meals on Wheels in 2018, the Comal County Senior Citizens Foundation (CCSCF) found itself in a tricky position. Although CCSCF has made Meals on Wheels deliveries in Comal County since 1984, the organization had no experience with the program in Karnes, Wilson and Guadalupe Counties—the territories they assumed from CCSCT. And they had few drivers for those areas.

The Foundation was one of several regional organizations that stepped up to take over Meals on Wheels routes in counties formally served by CCSCT. The main problem, explained CCSCF Volunteer Coordinator Kathy Villarreal, was that CCSCF essentially had to start from scratch to recruit drivers in some of the new areas.

“We were in dire need of drivers,” Villarreal said, “and we had no contacts in those places.”

Fortunately, CCSCT helped coordinate and ease the transition, and a few organizations from within Karnes, Wilson and Guadalupe counties—especially churches—stepped up to help, too.

In Seguin, GVEC was among those organizations.

GVEC: Wheels to the Road in Service

After signing up, Tankersley began delivering to Meals on Wheels routes in the McQueeney area. She made weekly deliveries, bringing fresh, hot meals to between 8 and 10 seniors. She did each route during her lunch break, which is standard procedure for all Meals on Wheels volunteer drivers.

“Volunteers pick up meals for delivery between 10:30 and 11:30 a.m. from an area hub,” Villarreal explained. “In Seguin, St Andrew’s Episcopal Church serves as the hub—they’ve been a great partner for us, too.”

The Right Time to Make a Difference

Meals on Wheels drivers make deliveries between 12 and 1 p.m., with the last delivery completed no later. This schedule allows volunteers to use their lunch hours without creating serious scheduling conflicts. For Tankersley, the time worked perfectly.

“It was just one time a week,” she said. “But with that hour, I was able to have a big impact on the lives of these seniors—I could see it in their faces, hear it in their voices. Sometimes their compliments and other little things they said really made my day. There was just this genuine appreciation—and not just because I was bringing them food.

“For some of these people, I was their only face-to-face contact during the course of a day, and it was nice to just slow down from my own busy schedule, and maybe make somebody’s day a little better.”

The Bonds of Doing Good

Due to family and work commitments, Tankersley has stopped making deliveries for now, but may eventually return. She definitely misses the people. “Sometimes, if I had a regular [recipient] on my route that didn’t get a meal that day, I would look at the notes and sometimes be heartbroken because they were in the hospital, and I’d worry about them. There’s a real relationship that forms, and I’d highly recommend Meals on Wheels to anyone that wants to make a genuine difference in people’s lives.”

For Villareal, volunteers like Tankersley provided critical assistance as CCSCF transitioned to the area’s Meals on Wheels coordinator. Those initial drivers helped smooth things over during the change in management.

“She was tremendously helpful,” Villareal said. “We’d always welcome her back, and we’re always looking for drivers. Our numbers continually fluctuate—it’s just the nature of the program. I welcome anyone with an interest in helping people to join us. It’s an extremely rewarding way to give back. It’s a great way to teach your kids about volunteerism—especially around the holidays—and to help your community.”

Volunteer as a Local Meals on Wheels Driver

To volunteer as a Meals on Wheels driver in Comal, Karnes, Wilson or Guadalupe Counties, call Kathy Villareal at the Comal County Senior Citizens Foundation, 830.629.4547, ext. 190, or visit nbsenior.org to access the Meals on Wheels volunteer application.