The Evolution of Outage Reporting 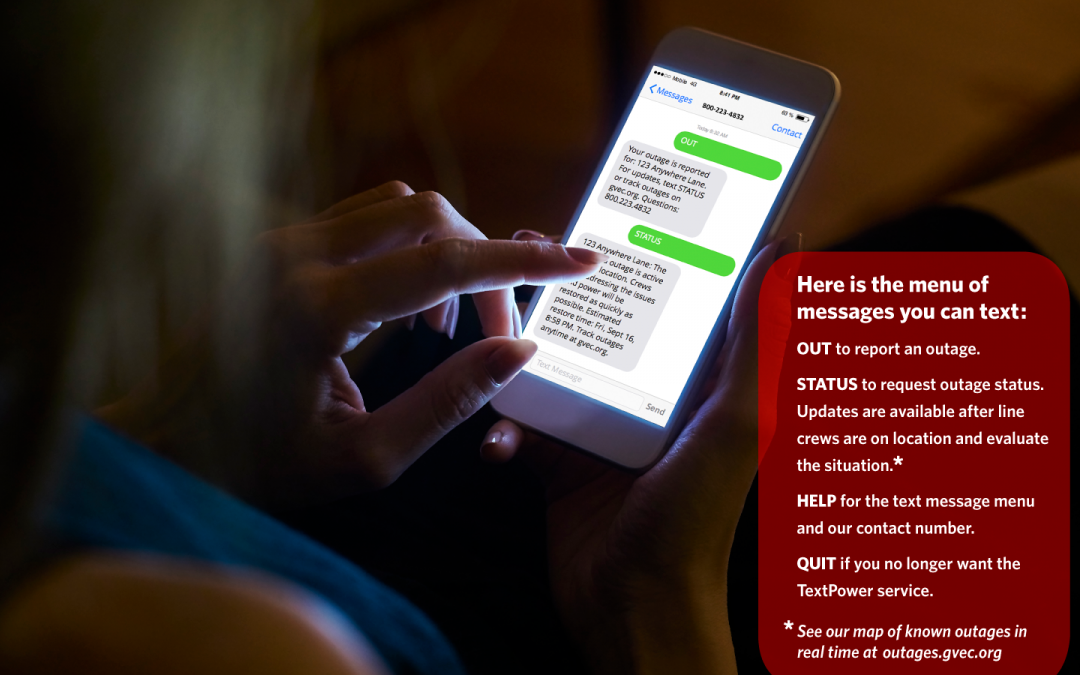 Over the past 80 years, GVEC has changed in many ways. The explosion of modern technology has made outage reporting no different. Today, reporting an outage is as easy as making a quick phone call or sending a simple text. Have you ever wondered how members reported outages in days past? Here’s an interesting history lesson over how reporting outages evolved into the TextPower program we use today.

For the first forty years of GVEC service, reporting outages and monitoring lines during inclement weather was largely dependent upon notifications from the membership. With no official Control Center in operation in GVEC’s first few decades, members were asked to place a collect telephone call to the Cooperative’s office in Gonzales and later Seguin. Those calls typically gave dispatchers a good idea where the lines were down or out during business hours.

But who took the calls after-hours? We’ll illustrate with a scenario. The year is 1947. An outage-call rings through on a rainy, chilly January night. The “dispatcher” listens closely, taking down the relevant information and promising to relay the job to the on-call lineman immediately. After hanging up, she strolls into the bedroom (probably dressed in slippers and a housecoat) and wakes the on-call lineman. “Honey—time to go keep the lights on.” 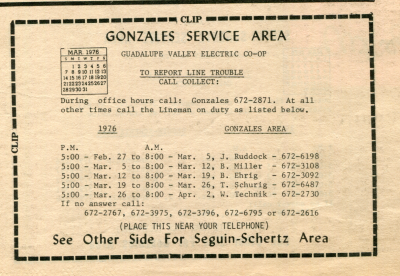 This is an example of the type of ads that were published for GVEC members to use as resource when outages occurred after hours.

Until the late 1970’s, lineman wives unofficially served as after-hours dispatchers, directing their husbands to trouble calls when they would check in. Ads were published in the GVEC newsletter (and phone book), giving members the phone numbers of on-call linemen to address outages. These dedicated wives weren’t formal employees, but they nevertheless routinely stayed up all night taking calls and dispatching their husbands until the last outage was restored.

By the late 1970s and early 1980s the linemen’s wives were off the hook when it came to accepting after-hours outage reporting calls. Fielding outage report calls became the work of the Gonzales County Sheriff’s Department and the Guadalupe-Blanco River Authority. These agencies dispatched member’s calls to GVEC via phone or two-way radio and later, via pager system.

New Technologies Take Up the Call

We’re now equipped with an array of cutting-edge tools to keep outages as infrequent and short-lived as possible. We have technologies such as geographic information systems (sophisticated mapping systems), fiber-based communications, automated outage reporting, and smartphones have placed two-way radios and landlines into supporting roles.

In 2001, we opened our 24-hour, state-of-the-art Cooperative Control Center (CCC) to notify our linemen of outages. GVEC dispatchers staff the Control Center round-the-clock, 365 days a year—taking calls, monitoring the grid and informing linemen of when and where they’re needed. Making reporting outages as simple as using the SmartHub® app or a quick phone call for our members, no matter the time of day!

In 2017, we launched our TextPower program to give our members an even more convenient way to report an outage—by simply texting us. TextPower allows GVEC members to report outages, get updates and receive restoration notices!

Here’s How it Works:

All you have to do is text 800.223.4832 with either of the following words depending on your request. Reporting your outage through TextPower ensures it is routed directly to our Control Center.

GVEC’s Technology Has Upgraded but Our Approach Remains Unchanged

Although we embrace modern technology’s continual push for improvement, our approach to people and community remains unchanged. That approach is rooted in the same spirit that motivated lineman wives all those decades ago to serve as unpaid dispatchers: a dedication to delivering the unexpected and to exceeding member expectations.