During summer and winter, electricity usage across the state is at its highest. This is why ERCOT is most likely to issue Energy Alerts during these times of year. If you’re unfamiliar with ERCOT and ERCOT Alerts or why you need to be aware of them, the FAQs on this page are a great way to learn more. You can find additional information about ERCOT on our blog or you can visit ERCOT on the web. We also regularly write about ERCOT in The GVEC Review and on GVEC Social Media.

ERCOT stands for the Electric Reliability Council of Texas. It is an independent electric-system operator, managing most of the Texas electric grid. ERCOT is governed by a board of directors, with oversight by the Public Utilities Commission of Texas and the State Legislature. Its members include consumers, and electricity generators, marketers, and providers. “Providers” include transmission and distribution specialists, investor-owned utilities, public-owned municipal utilities and cooperatives like GVEC.

What Does ERCOT Do?

ERCOT manages the power supply to over 25 million Texas electric customers. It schedules and regulates electricity across a grid of 46,500 miles of transmission line and more than 650 generation units, balancing supply and demand in real time. ERCOT manages around 90 percent of our statewide electric load. It’s not incorrect to think of this agency as both gatekeeper and warden of the Texas power grid.

What is ERCOT’s role in the power supply chain?

ERCOT works 24 hours a day, 365 days a year to make sure the amount of power consumed on the grid never equals or exceeds total generation capacity. When there’s an imbalance at the local level, ERCOT works with generators and suppliers to make sure the difference is financially “settled.”

How Does ERCOT predict peak demand for seasonal usage?

Every year, ERCOT takes inventory of statewide generation capacity. From this assessment, the agency creates a forecast of how much total electricity generation will be possible across the grid, all at once, during day-to-day operations around the state. The agency also strives to maintain its reserve capacity each year at 13.75 percent of estimated peak usage.

What does ERCOT do to help prevent power shortages?

Throughout the state, summer is a time of intense electric usage, especially through the week, between 3 and 7 p.m. In addition to this being the hottest part of the day, it’s also when people are arriving home from work and school and are cranking down the AC, turning on the TV, starting dinner, running the dishwasher and so forth.

Winter is also a time consumers pull much energy when heating their homes. Winter peak demands tend to occur during the early morning from 5 to 9 a.m. and early evening from 4 to 9 p.m.

Power shortages between generators and suppliers do happen across the Texas grid. High energy demand at the local level usually doesn’t have much impact statewide; however, an all-at-once spike in demand across the Texas grid that approaches or exceeds total, statewide capacity can have serious consequences for availability. Such spikes are a very real threat during the height of Texas summers or on occasions of extreme winter temperatures. One of ERCOTS’s most important tools for helping restrain usage across the grid is known as the four coincidental peaks (4CP).

You may have read about the four yearly coincidental peaks in The GVEC Review or here on our blog. The 4CPs occur one per month every June, July, August and September. These peaks happen when demand for electricity across the statewide grid reaches its highest point. ERCOT bases the next year’s share of transmission costs for each Texas provider on the provider’s share of grid demand during these four peaks. It’s important, then, for each consumer within a provider’s territory to restrain usage as much as possible during 4CPs to keep rates down.

As a way to help our members reduce usage during the 4CPs, GVEC has partnered with ecobee and Nest® to offer Peak-Time Payback, our latest and most rewarding peak-time usage program. For more information on how you can help reduce GVEC’s overall grid demand during ERCOT’s 4CPs—and get paid doing it—visit our Peak-Time Payback page.

What does ERCOT do if system-wide electricity shortages hit the Texas power grid?

ERCOT does have plans in place, including a reserve power supply, in the event that statewide power consumption comes close to equaling or surpassing what’s generated and delivered. The agency’s system is made up of a preemptive Conservation Alert and three Energy Emergency Alerts (EEA). These alerts increase in severity with each new level.

What are ERCOT’s Energy Alert Levels?

At this level, ERCOT aims to raise public awareness about shrinking reserves and the need to actively conserve energy to prevent emergency conditions.

Level 1: The first EEA level is Conservation Needed. ERCOT issues this alert when operating reserves drop below a target threshold. This level puts providers on notice to take preliminary measures to curb demand before the situation worsens.

Level 2: If conditions worsen, ERCOT will next issue an EEA Level 2 – Conservation Critical. At this level, providers are permitted to reduce their power load by interrupting supply to large commercial and industrial accounts. The contracts these clients sign stipulate that such measures may be necessary in an emergency.

Level 3: If power supply declines further, ERCOT will then declare an EEA Level 3 – Rotating Outages in Progress, the final alert level. At this level, ERCOT will require electricity providers throughout the state to begin introducing temporary outages at the local distribution level—also known as rolling brownouts or rotating outages.

What are rotating outages?

Rotating outages, sometimes referred to as “brownouts,” are temporary, controlled interruptions of service. They typically last 15-45 minutes. During these outages, service is interrupted within only one section of a local grid at a time before rolling on to another section. The need for rotating outages across the Texas energy grid are rare. ERCOT has mandated them only three times in its entire history.

The answer here is more complicated than the question implies. The three biggest drivers behind shortages in state energy reserves are the economy, population growth, and changes in the energy market itself.

In the last decade, solar and wind power have emerged as a serious force in the energy marketplace, driving electricity prices steadily downward. Natural gas has also become a factor in energy prices in certain places around the country, including in the ERCOT North hub. New technologies have driven energy prices so low, in fact, that investing in new generation assets has become less economically practical for producers. Many companies are either delaying or canceling new generation projects until the market becomes more favorable.

These market factors, combined with Texas’ ongoing economic and population growth, have created an environment where electricity demand significantly increases each year at a pace faster than reserve energy can be generated. It’s important to note that, no matter how much power that suppliers purchase from their producers, it’s impossible to fill the demand if total generation and reserve capacity across the statewide grid can’t keep up with what consumers use.

Although most people think of summer as the season of extreme temperatures in South Central Texas, winter often hosts significant rises in electricity consumption as people warm their homes when temperatures drop. Here are some tips to help conserve energy during winter weather.

Limit electricity usage to only that consumption that is absolutely necessary. Turn off all unnecessary lights, appliances and electronic equipment.

Turn Down Your Thermostat

Turn the temperature on your thermostat down to 68 degrees. If that seems too cool, find ways to stay warm in your home without turning up the heat in this blog.

Do not use your dishwasher, laundry equipment, hair dryers, coffee makers, pool pump or other home appliances unless absolutely necessary, especially between the hours of 5 to 9 a.m. and 4 to 9 p.m.

Open or Close Your Blinds and Drapes

Open blinds and drapes on sunny days to utilize the sun’s natural heat during the day. Close them at night to reduce the amount of heat lost through your windows.

Businesses should minimize the use of electric lighting and electricity-consuming equipment as much as possible. Larger consumers of electricity should consider shutting down or reducing nonessential production processes.

Since summer is the one of the year’s highest electricity-use seasons, conserving energy wherever possible is crucial—especially during peak times (see “What is 4CP?” above). Here are some tips for helping conserve through the heat of South Central Texas. 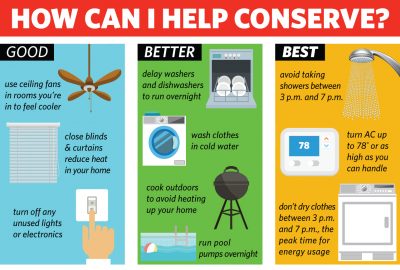 Turn on the Fans...Turn off the Fans

Use fans when you’re home, but turn them off when you leave the room. Although fans don’t lower the room temperature, they make your skin feel 4 to 6 degrees cooler, allowing you to set your thermostat temperature higher.

Set thermostats 2 to 3 degrees higher, from 3 to 7 p.m. GVEC recommends setting your thermostat to 78 degrees all summer long or to the highest possible temperature you can tolerate.

Set Pool Pumps to Run in the Morning or Overnight

You can help lessen strain on the grid during peak times by running your pool pump outside the 3 to 7 p.m. time frame.

Run Large Appliances Before or After Peak Time

Avoid using large appliances during peak time, which is between 3 and 7 p.m.

Close curtains and blinds during the hottest part of the day. Doing so helps prevent heat gain through your windows, improving energy efficiency.

Turn Off the Lights

Make sure to turn off unnecessary lighting when you leave a room and before you leave home.

Wash your clothes in cold water. By some estimates, up to 30 percent of a home’s energy bill comes from the water heater.

Many current electronic devices continue using power even after the power button is switched to the off position. Coffeemakers, computers, gaming consoles, smart TVs and more fall into this category. Generally, if a device has a power indicator light that remains on even when the device is powered off, it is still draining electricity. We recommend plugging energy vampires into a power strip. This way, you can turn them all off at once with a flick of the switch.

In addition to lowering an HVAC system’s energy efficiency, a dirty AC filter can cause lots of problems, including increased wear and tear on the system, uneven cooling and more.

Did you know GVEC offers more than electricity? Learn about our other services: AC/Heating sales and service, high-speed wireless and Fiber optic Internet service, solar technology and more.

From wireless high-speed internet to Fiber to the Home, GVEC offers you exceptional service from a local company you know and trust.

Stay current on our news and monthly articles as well as get valuable energy efficiency tips and much more.