Apr 8, 2020 | Energy Efficiency, Products, Services and Us, The GVEC Review 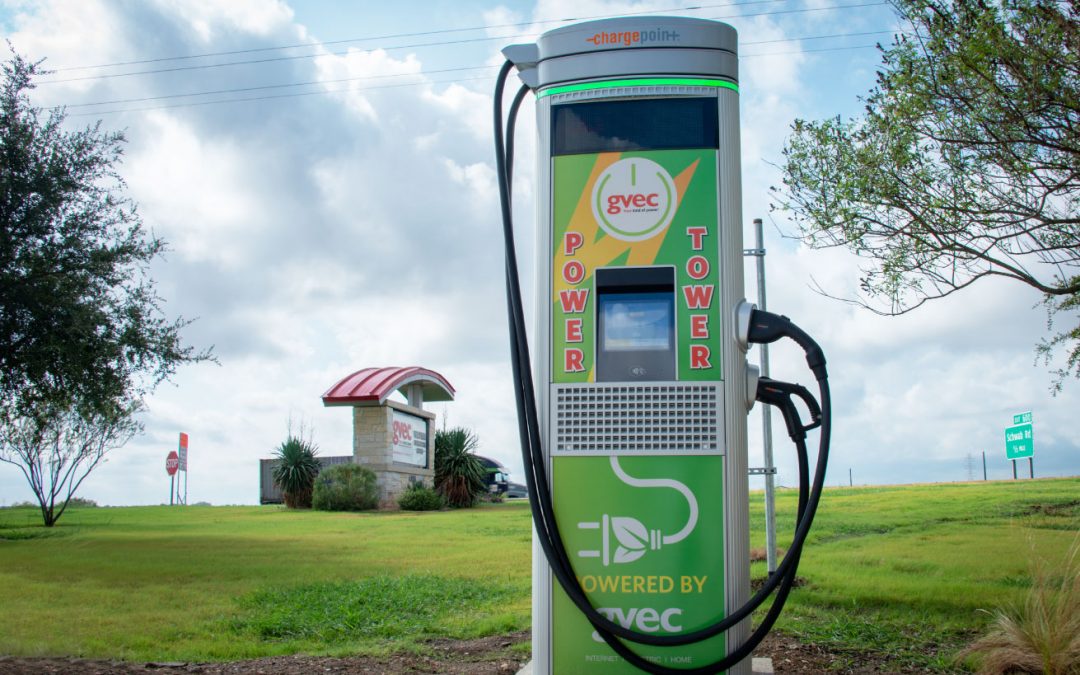 At GVEC, Earth Day is a chance to celebrate the power of conservation and efficiency. Last year, we added a compelling new product to our lineup for helping celebrate that power: public GVEC Power Tower™ Electric Vehicle (EV) fast-charging stations. GVEC Power Towers are part of the Cooperative’s entry into the up-and-coming EV market. More precisely, Power Towers are GVEC’s version of an EV “fueling” station.

Many current EVs don’t have an option to run on liquid fuel. Instead, these vehicles must literally be plugged into a power outlet so their lithium-ion batteries can charge. The battery discharges that electricity into the drive shaft, turning the wheels and creating a driving experience that’s mostly identical to that of a vehicle powered by an internal combustion engine (ICE). GVEC Power Towers, then, are basically electrified EV “gas” stations.

The move toward EVs is part of a larger effort toward a world powered by fewer nonrenewable energy sources. As a whole, modern vehicles account for roughly 15% of the world’s nonrenewable energy usage. It’s easy to see, then, how adopting EVs on a wider scale could help significantly reduce society’s dependence on nonrenewable energy. At GVEC, we think the coming era of the EV is cause to celebrate on Earth Day 2020, but it’s critical that we’re prepared for the time when EVs will be as common as ICE vehicles. Power Towers have a vital role to play.

The EV Era is Closer Than You Might Think

Industry experts predict EVs will cost less to own than ICE counterparts by 2024. They further predict EVs will make up half of all vehicles sold worldwide by 2040. Powering all those vehicles will require massive amounts of electricity, placing new, unprecedented demand on electric grids. No one knows yet precisely how this new demand will impact existing infrastructure or what the implications for generation and transmission will be. In the coming months and years, GVEC Power Towers will help fill in the blanks by delivering critical data about possible impacts of widespread EV adoption on our electric grid.

Assisting us in obtaining this important data is Sparky, GVEC’s first-ever EV, purchased in late 2018 (pictured). Sparky has his own, nonpublic charging station, providing additional insights into the impact of EVs on our grid.

If you already own an EV and want to help support GVEC’s research, consider dropping by one of our Power Towers at our Seguin Customer Service Center (927 N. Highway 46) or at our Western Operations Center in Seguin (6400 IH-10 W.) when you’re in the area and need a charge!