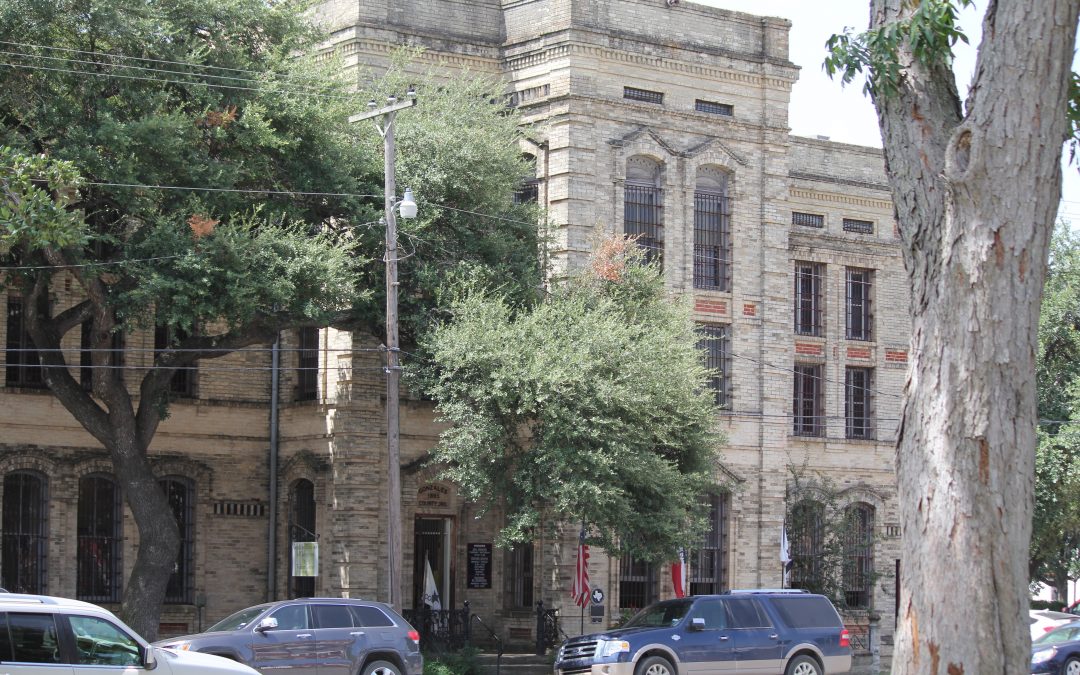 Ghost stories are often just that—made-up or exaggerated urban legends, created in the imaginations of the story tellers, often embellished as they are passed down from generation to generation. However, please note the use of the word “often.”

Sometimes we hear stories that have maintained an impressive level of consistency no matter how many years they’ve been in circulation. These might include accounts given by a variety people with similar firsthand experiences at certain places. They are the tales that cause hair-raising goosebumps or send shivers down spines. And in our area of the Guadalupe Valley, we don’t run short on these anecdotal reports.

In celebration of the spooky season, we thought it’d be interesting to feature three notable haunting tales of spooking places within GVEC communities—two of which individuals with a curiosity of the supernatural can visit for themselves.

Yoakum became incorporated as a Texas town in 1889, after a major section of the San Antonio and Aransas Pass Railway and roadhouse was constructed at the settlement. The hub city quickly began to grow and thrive, and a hospital was built in 1922. The facility remained in operation until 1997 when construction of a new hospital and medical center was completed.

When the hospital was no longer able to financially sustain itself, the City of Yoakum decided it best to turn over management to the Sisters of the Incarnate Work and Blessed Sacrament of Victoria in 1933. In the early 1980s, the Sisters of Charity of the Incarnate Word of San Antonio came on board to sponsor management of the facility. This history of “nun-run” administration may be the root of one of the hospital’s best known entities—“the blue nun.” Although the specific origins or identity of the blue nun isn’t clear, stories of sister spirits haunting the hospital have been recalled for decades by former residents and staff—especially on the third floor.

Articles about occurrences and ghosts of the “Old Yoakum Hospital” have been written in publications and websites including the Victoria Advocate and Texas Hill Country News. The hospital is also featured on paranormal YouTube channels and was the subject of an episode of the PBS series Strange Town in 2016.

In the middle of downtown Gonzales stands the beautiful architecture of the Gonzales County Courthouse, and sitting next to it is the old county jail house. The Courthouse still functions for criminal and civil hearings and trials in the county seat. While the old jail is still open, it’s only in operation as a museum and houses the Gonzales Chamber of Commerce & Agriculture offices. Both buildings are said to be haunted. Chamber employees have stated they’ve heard sounds of footsteps and doors opening or closing in empty areas of the building.

The grounds of the Courthouse and old jail were also the site of the five legal hangings that occurred in the county between 1855 and 1921. The last hanging on March 18, 1921, was that of Albert Howard, a prisoner who strongly maintained his innocence throughout his entire sentence. While incarcerated, he could see the hanging gallows and the Courthouse clock, which he became obsessed with as he watched the clock each day, counting down the days and hours until his execution. Before he was hanged, he stated the clock would prove his innocence.

After Howard’s hanging, the four faces of the Courthouse clock have rarely kept time in synchronization again. The clocks have also been struck by lightning numerous times since the execution, compared to never having been reported as struck in its 25 year history prior to Howard’s death. Even after the entire clockworks were removed and completely restored and reinstalled in the 1990s, the clocks have seldomly reflected accurate time.

Visitors can call 830.263.4668 or check out their Facebook page to find information about visiting and touring the Gonzales County Jail Museum.

The Magnolia Hotel in Seguin is considered to be on of the most haunted motels in Texas according to its website. It’s been featured on Ghost Adventures, Paranormal Files, Ghost Brothers and a slew of other paranormal shows and media forums.

The structure was originally built in 1840 as a two-bedroom log cabin by James Campbell, one of the original Texas Rangers, with a basement that served as a jail as well as an “Indian raid shelter.” Campbell was targeted and brutally murdered after participating in a battle known as the Counsel House Fight.  He was buried in an unmarked grave near the cabin.

The cabin was later sold, and rooms were added on to establish Seguin’s very first hotel. The hotel continued to be updated and improved by its various owners throughout the years. In the 1830s, it was willed to the relatives of its final owners before it closed. The relatives allowed the hotel to become run down and dilapidated. In 2013 current owners Jim and Erin Ghedi purchased the hotel and began restoration efforts.

Paranormal activity occurring throughout the restoration process is said to have caused contractors to quit and work to be paused. The Ghedi’s decided to continue the renovation projects on their own and learned to co-exists with the ghostly residents. It’s been noted that at least 13 individual spirits have been identified at the Magnolia. These include an unknown traveler who committed suicide in an upper room, a weeping lady who was heartbroken when her sweetheart never arrived to meet her at the hotel, a young girl whose mother locked her in their hotel room while she went to work, and a girl named Emma from New Braunfels.

Emma was thought to have been murdered by a family friend named William Faust. Faust was said to have killed Emma with an ax after attacking and injuring his wife one night in 1874. His wife was staying with Emma’s family at their New Braunfels home. People believed Faust intended to murder his wife and killed Emma as a way to eliminate witness of the attack. So why would the Emma’s ghost inhabit a Seguin hotel when her murder took place in a separate location in a different town?

Owner Erin Wallace-Ghedi believes it’s because Emma wanted the identity of her true assailant revealed. You see, Faust was in Seguin on business and a guest of the Magnolia Hotel on the night of the occurrence. Supposedly he road horseback an hour to New Braunfels, committed the atrocity, and returned to the hotel with no one noticing. Faust was tried and convicted of murder and was shot and killed while in prison. However, when looking into Emma’s murder for a book she was writing about ghosts of New Braunfels, Wallace-Ghedi became convinced there was more to Emma’s story.

After further investigation, Wallace-Ghedi discovered an old newspaper article stating a man named M.P. Deavers was staying at the Magnolia during the same period as Faust. The article also stated Deavers made a deathbed confession to Emma’s murder as a result of a botched robbery attempt. Details of Wallace-Ghedi’s discovery can be found in her book Mysteries of the Magnolia Hotel.

Book a Stay or Tour

You can book a stay at the haunted Magnolia Hotel if you’re looking for a place to stay in Seguin that has plenty of “spirit.” You can also sign up to go on a ghost tour of the hotel. Tour dates, including a Halloween tour, can be found on the Haunted Magnolia Hotel website.