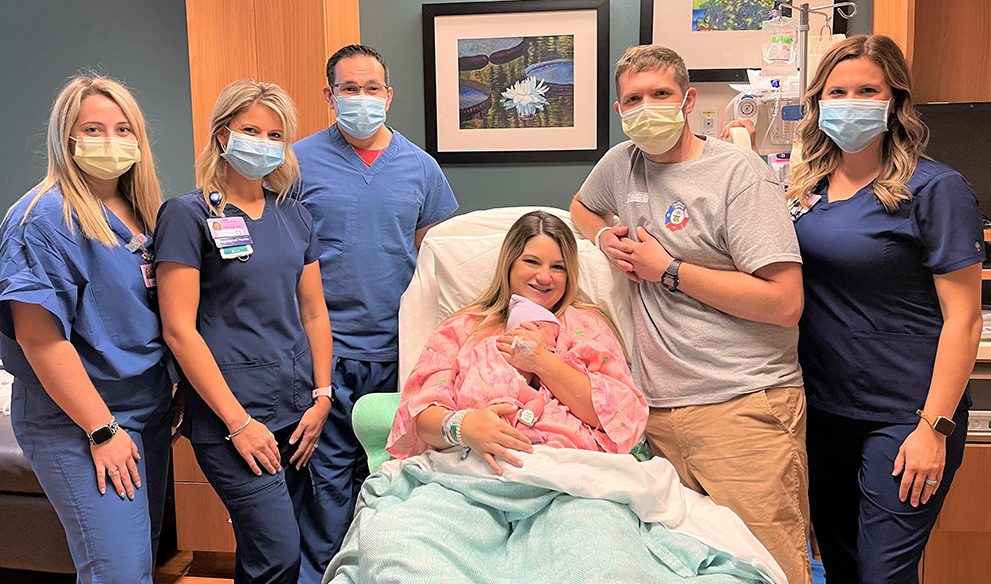 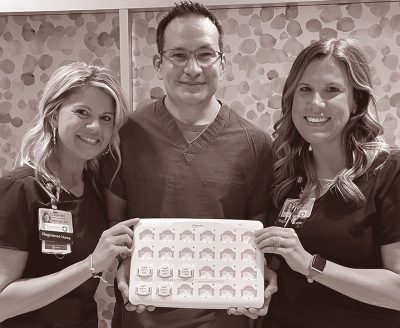 As registered nurses and leaders of the Birthing Center at Guadalupe Regional Medical Center Lauren Riggs, RNC-OB and Chantel Ewald, RNC-OB know firsthand how disruptive and stressful false alarms from a newborn security system can be. Such false positives were occurring frequently when the Guadalupe Regional Medical Foundation (GRMF) applied for a Power Up grant in 2021 to replace GMRC’s aging infant security system.

Protecting the Most Precious of Patients

Newborns are among any hospital’s most vulnerable patients. Keeping little ones safe and accounted for is a constant priority, and that’s why most modern healthcare facilities use some variety of infant security system. These systems are designed to document and track newborn whereabouts in real-time during hospital admission. If a baby is moved beyond a tracking system’s boundaries, an alarm triggers, alerting staff to a possible security breach. When operating properly, these systems help prevent both unauthorized access and mother/infant mismatching. When a security system produces false alarms, though, these can potentially reduce overall quality of care for other patients and cause pronounced, undue stress for staff and parents.

GVEC Power Up for Infant Security 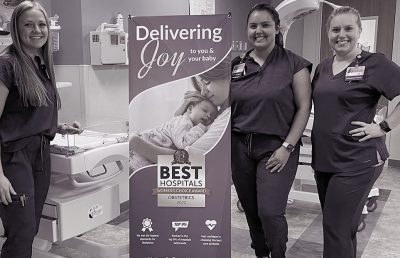 GRMC welcomes some 800 newborns into the world each year. In addition to Seguin women, expectant mothers from Gonzales, New Braunfels, La Vernia, Luling and other nearby communities also depend on the hospital for maternity support. That’s a lot of babies and a lot of trust built during almost 60 years in operation. “Our previous system was outdated and not performing to GRMC’s high standards of care,” Ewald explains. “Frequent false alarms were drawing staff away from other patient-care demands.”

In September, GVEC named GRMF one of eight winners of 2021’s second Power Up cycle. The $20,000 award helped the hospital purchase a new, state-of-the-art Hugs® Infant Security System from Stanley Healthcare. “Hugs is the #1 infant security system globally,” Riggs explains. “It’s designed with advanced technology that produces fewer false alarms than almost any other system available. That allows nurses to spend more time at the patient’s bedside instead of wasting time investigating and correcting false alarms.”

The Hugs system allows newborns to be monitored throughout the entire hospital. GRMC’s previous system limited monitoring to within the Birthing Center. The system uses a lightweight, Wi-Fi capable electronic bracelet, pictured here, that fastens around the infant’s ankle. The Wi-Fi signal activates when the bracelet is applied, enrolling the newborn in the system and enabling continuous monitoring until discharge. 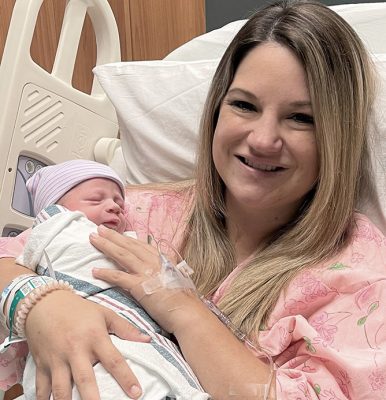 GRMC maternity patient Heather Keyser recently gave birth at GRMC to son Kolton, her second child delivered at the facility. Keyser has direct experience with both GRMC’s previous security system and the new Hugs system. “The new infant security system at GRMC really has given me peace of mind to know my baby is in a safe environment,” she says. “After just recently giving birth at GRMC in 2020, it is wonderful to see the advance in efforts to promote safety during our stay. My husband and I appreciate having one less burden to bear while recovering.”

GRMF Chief Executive Officer Elaine Bennett coordinated the hospital’s Power Up grant application. Having worked with GVEC in the past, she viewed the Cooperative as a strong potential partner on the Stanley Hugs security system project. “GVEC supports the communities they serve, and we believed this project aligned with their mission and values, ” she says. “We were thrilled with the assistance GVEC provided through the Power Up grant. This sizeable grant allowed us to improve the security of our tiniest patients and provide peace of mind to their parents. GVEC’s community-minded generosity helped GRMF support the hospital and GRMC’s Birthing Center to improve care in our region.”

GRMC CEO Robert Haynes is himself a Cooperative member. He contributes each month to GVEC Power Up by rounding his monthly electric bill up to the nearest dollar, with the rounded up amount being donated. He thanked both GVEC and other Cooperative members for making Power Up possible. “By rounding up our bills, this cumulative effort becomes a synergistic force where 1 plus 1 is greater than 2. In this case, that generosity helps ensure the protection and safety of infants from their first day of life. As the CEO of GRMC, I am proud to accept this donation. I thank GVEC members for their generosity.”

GRMC does not have a hospital district and is therefore not supported by a tax base, making direct community support vital in serving Guadalupe County and surrounding communities. To find out how you can help, call 830.401.7209.

Since 2012, the GVEC Power Up grant program has awarded over $3 million in funding to local nonprofits. The application deadline for the next award cycle is August 15. To learn more or to complete an application, visit gvec.org or call 800.223.4832.