Being Santa: A Fire Department and Family Tradition 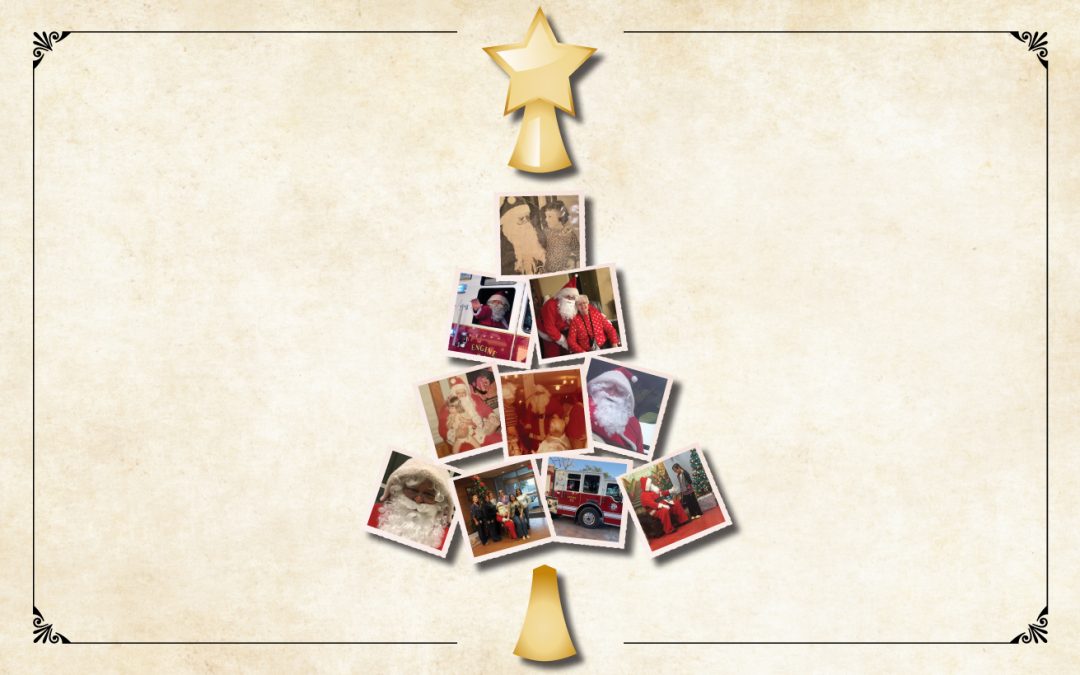 As you can imagine, this is a very busy time of year for Santa. There’s so much to do—making sure toy quotas are met, finishing the second check of his list, making sure his reindeer are healthy, and tuning up his sleigh for his annual trip around the world. It’s no wonder he needs extra help during the holiday season. For this reason, Santa sometimes enlists the help of certain people.

Mary Ellen Erwin knows this first hand. When she was a girl, she received a letter from Santa Claus himself. The letter explained the need to bring in extra personnel to fill in for him at busy times. It went on to state that Santa chose very special people he believed would do a good job at spreading Christmas joy, and her father Randle “Poochy” Kridler had been selected as one of these special helpers.

A Special Suit for a Special Helper

Being a larger fellow, Kridler wasn’t able to find a Santa Suit in stores or catalogs to fit his jolly physique. Thankfully, his mother was an excellent seamstress. She created a traditional red corduroy ensemble with faux fur trim and brass jingle bell accents.

Once his Christmas attire was complete, Kridler began his Santa duties in Gonzales at The Lynn Theater in the early 1970s. He would also play Santa at nursing homes and for various organizations’ Christmas parties when asked.

Local fire departments have a history of taking a special part in Christmas events in many towns also, often in the manner of providing transportation for Santa when he comes to town prior to Christmas Eve.

The same is true for the Gonzales Volunteer Fire Department (VFD). According to Gonzales Volunteer Fireman and former Fire Chief Billy Booth, one day, one of the firemen had the idea of asking Kridler to play Santa and ride on a fire truck to the younger campuses of Gonzales ISD—the start of a tradition that continues to this day.

“The kids would be outside,” Booth said, explaining that schools would always have a fire drill on the last day of class before Christmas break, “and he’d be on the back of Engine No. 7 throwing candy canes or little stuff to them. He’d always have something for them,” Booth recalls.

Current Fire Chief Keith Schmidt was a student in Gonzales ISD while Kridler was portraying Santa with the Gonzales VFD. Like many, he can remember the annual fire drills and seeing Santa come by on No. 7 a s well. He says he would like to see the tradition continue for his community as long as possible.

Kridler’s younger son Joseph (also called Poochy because of his near-identical resemblance to his father) has memories as a young student, seeing Santa on the fire truck. He didn’t know it was his father until he was a bit older, and he never considered this to be something he would someday do until he joined the Gonzales VFD as an adult in 2002.

By this time, his father had become unable to fulfill the role of Santa for the department anymore due to declining health. Though there had been men to fill the role after Kridler for a few years, when Joseph joined the VFD, there was no one doing it.

“I remembered him doing it when I was a kid and how fun and exciting it was when we’d see Santa coming down the road on the engine, so I suggested doing it. I wanted to provide that experience for the kids and carry on the tradition,” Joseph said.

Joseph has only ever worn his dad’s Santa suit. His grandmother made it; his father wore it; his family has memories of the older Poochy proudly donning it. And luckily, the suit fit him perfectly when he took over as Santa.

Though it’s a little big for him now and quite hot, being made from heavy corduroy, Joseph says he doesn’t think wearing a different suit would be the same. “I feel like Santa is portrayed differently [today] than when my dad did it. This [suit] is more old school. Times are changing, society and beliefs are changing—his suit represents a time I was fond of, simpler. And wearing the one he wore while bringing a lot of happiness to kids, and knowing that I’m doing the same, is special.”

For Joseph, helping to create Christmas memories is almost a kind of responsibility when wearing the suit his grandmother sewed. “I used to find a Santa hat on my dad’s grave every year at Christmas time for a while. One year, there was a note with it that said something like, ‘You were the first Santa whose lap I sat on.’ To know my dad was meaningful to that person’s childhood memories was awesome. It was cool to think I could do the same.”

Because of this, Joseph says yes to playing Santa as often as he can. In addition to portraying Santa for the VFD, he’s been Santa for day cares, Boy Scout troops, and various organizations in Gonzales and other towns.

Although being Santa for the Gonzales VFD wasn’t something Joseph’s dad ever discussed with him or asked him to do, he’s very glad he decided to do it. He’s made many of his own special Santa memories in the process.

“There was one year a boy at Gonzales Primary kept shouting to me, ‘I believe,’ when we rode by. And the year my wife and kids moved here, my youngest son, recognizing me once I got closer, was giggling so loud and yelling, ‘That’s my dad, y’all! I think that’s my dad!’ We had to explain to him my role as one of Santa’s special helpers and the importance of keeping the Christmas magic for other children.”

Having three sons, Joseph says it would make him very happy to see them volunteer in their communities as his father often did and the way he currently does, whether it be with a volunteer fire department or in other capacities. And he would be proud for one of them to wear the suit and carry on this Christmas custom after he hangs up his Santa hat one day—even if they need to add extra padding. “I know they love the season as well, and to pass being Santa on as one of our family traditions would be neat.”