Lighting Up the Holidays: Yoakum Gets a Power Up for Christmas 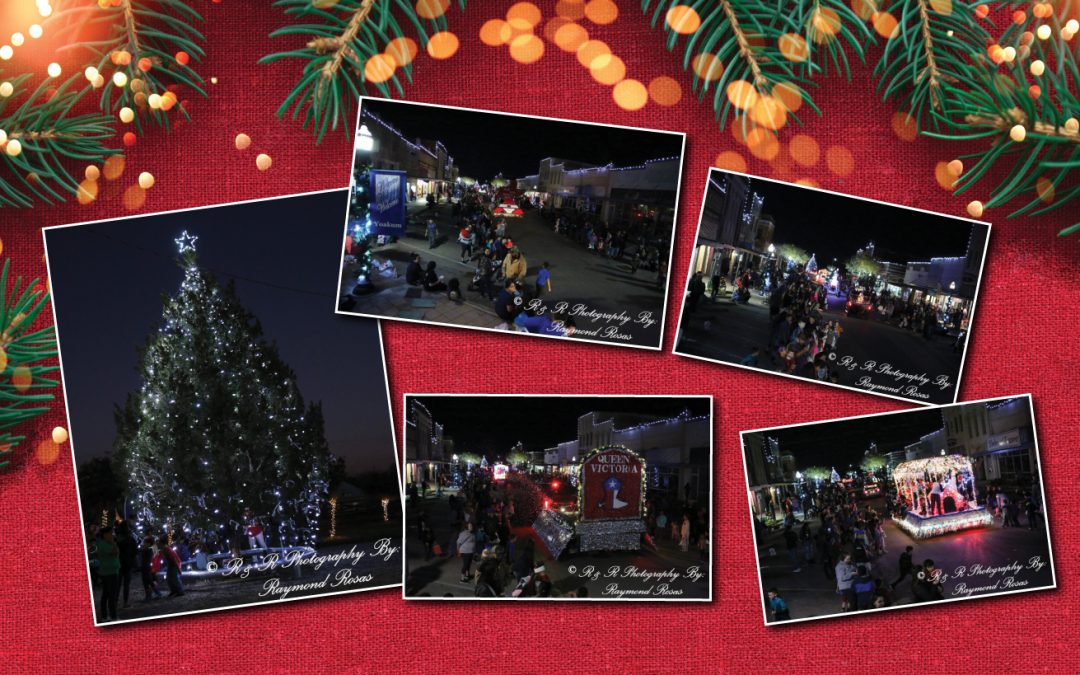 When the Christmas lights finally burned out in downtown Yoakum in 2008, the holidays were a little dimmer in that vital part of the city for the next decade. Those old decorations remained frozen in place all those years, outlining building facades along Grand Avenue like a reminder from Christmases past. Yoakum City Manager Kevin Coleman recalled that those lights were hopeless. “They weren’t commercial grade to start with,” he said, “and were pretty old school—all incandescent. It just got to a point where it cost too much to maintain them.”

The Lights Come Back On

During the 2016 holiday season, a small group of interested Yoakum residents, including members of City Council and the Yoakum Chamber, met to find a way to bring coordinated holiday lighting back to Yoakum’s downtown district. “The city agreed to pay for some small decorations from the General Fund,” Coleman said. “And none of it involved those old, dead lights strung across the facades of our downtown buildings on Grand Avenue.” The end result was a small garland and wreath, along with other assorted decorations to spruce up the entryway gate into the downtown area. What this small display lacked in extravagance, it made up for by inspiring the group to go a little further in 2017. “That next year, we talked about Christmas banners and lights on poles and that kind of thing,” Coleman continued. “We ultimately settled on doing some updated lighting for the three parks that run along the city’s main streets—one of which is located downtown.”

For 2018, the Chamber raised the idea of replacing the worn-out lights attached to the buildings along Grand Avenue. Doing so required the building owners to agree to the removal of old lights and installation of new ones. All but one chose to participate. The Chamber pledged to pay half the cost of the new lights, while the Yoakum Economic Development Corporation (EDC) stepped up to pay the other half. The City of Yoakum agreed to do lighting removal and installation free of charge.

“2018 was kind of a turning point,” Coleman said. “It was year three of our larger project to redecorate the downtown area for the holidays, but it was the first year that more individuals and organizations got involved—that was big. We were able to replace the lighting on the buildings from Irvine Street to Front Street, along Grand Avenue.”

Yoakum Gets a Power Up for Christmas

In 2019—year four of the downtown holiday redecoration project—Yoakum EDC again stepped in to help pay the cost of any new lights. “We put a concept together that would light up Yoakum’s main drag,” Coleman said, “and the EDC agreed to pay half the cost of the lights—$3,294 in total.” Even so, there didn’t seem to be anyone with budget enough to cover the remaining half. That’s where GVEC entered the story.

Yoakum EDC applied for and received a Power Up grant for $3,294. It wouldn’t be inaccurate to say that the City Yoakum got a Power Up for Christmas. “Thanks to this grant,” Coleman said, “we were able to finish the Grand Avenue lighting and light up all the walkable parts of our downtown area, so people can enjoy them while out dining or shopping during the holidays. Without GVEC’s partnership, that second phase of restoring the downtown facade lights wouldn’t have happened.”

Pressing Onward to Another Christmas

The partnership between Yoakum EDC and its Power Up for Christmas did more than help push the final phase of the downtown holiday redecoration project over the finish line. It also inspired organizers to extend the initiative into a fifth year. “We’re certainly not done yet,” Coleman said. “There’s a Pohlpark along Front Street—Railroad Park—it’s an extension of the downtown area. That’s our next target, but with the pandemic, it’ll have to wait until next year. But you can bet we’ll get it done.”

Lighting Up the Spirit of the Season

Current Yoakum Chamber of Commerce President Sharla Pohl didn’t join the Chamber until February 2020. As a lifelong Yoakum resident, though, she has greatly appreciated the renovation of Yoakum’s downtown holiday lighting. She’s enthusiastic about taking an active role in the next phase, too. “The lighting—it just really puts you in the holiday spirit,” she said. “It doesn’t just remind you that Christmas is coming; it helps make Christmas something to look forward to. Plus, it makes our town more inviting. Those 10 years when the downtown lights were dark made me appreciate Christmas in downtown Yoakum all the more.”