48 Years of Serving: A Career Spotlight for National Co-Op Month 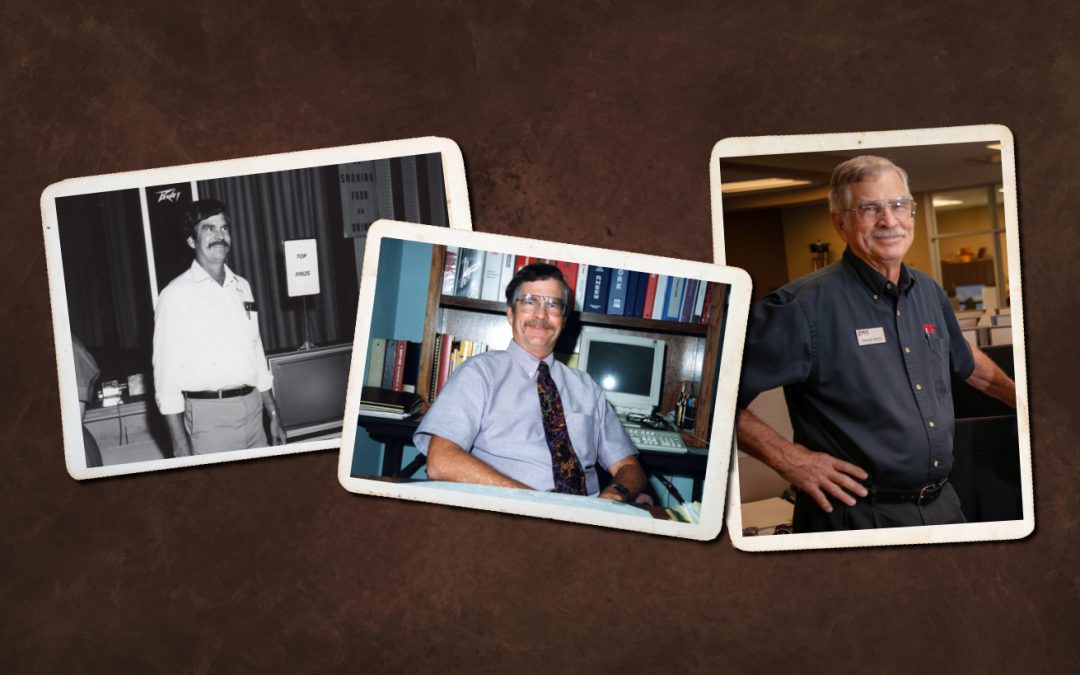 When GVEC Commercial Accounts Manager Gerald Moltz came to work on his first day nearly 49 years ago, he didn’t understand what a cooperative was. “I was a part-time student at Southwest Texas State, and I was tired of going to school,” Gerald recalled. “A friend of mine who went to school with me mentioned getting a job at ‘the co-op.’ He told me to ‘go on down there and talk to Tom Coor.’ And that’s what I did.”

Gerald had gotten married in June of that year, and in addition to being a part-time student, he also worked part-time in construction, road building and welding. When he spoke with Coor, the renowned GVEC line superintendent wanted to put him to work right away. “I offered to start after the first of the year,” Gerald recalled, “but he told me I’d miss out on an extra week of vacation if I didn’t start before then, so I said, ‘When do you want me?’”

Gerald’s first day came the following Monday—Dec. 20, 1971—for a starting salary of about $2 an hour. Nearly 49 years and a few pay grades later, in mid-August 2020, Gerald tendered his retirement notice. After almost five decades of serving GVEC membership and customers across the Guadalupe Valley, he worked his final shift on Oct. 2.

A Man of Many Cooperative Hats

In the years between, Gerald has worked as a groundman (his first position), a lineman, an electrification advisor, member services advisor, Guadalupe member services manager, Schertz area manager and his present position as a commercial accounts manager. He’s served during the tenure of three of the five general managers who’ve led GVEC during its existence.

After his promotion to Guadalupe member services manager sometime in the late ’80s or early ’90s, Gerald recalled asking then-GM Doyle Hines why Mr. Hines had selected him for the role. “I’d been here quite a while by then, and I remember Mr. Hines saying, ‘you’ve shown you’re a problem solver, and that’s what we need.’”

A few years later a different GM—Marcus Pridgeon—compared Gerald to a so-called “utility player” in baseball—a player that can play many positions well when called, though not necessarily at a Hall of Fame level. Those two assessments by different GMs greatly contributed to a career that’s been defined by multiple roles within the Cooperative. In fact, Gerald leaves not only as GVEC’s longest-tenured retiree, but also having held more positions than anyone currently part of our Cooperative family.

A Career of Growth and Improvement

In reflecting on his years of service, Gerald sees himself as having grown up with the Cooperative. He’s been part of GVEC for 60% of its existence, after all, with the Cooperative growing, changing and evolving in ways he couldn’t have envisioned on that first day.

“I was just a country boy,” he said. “I really just wanted to do something to make money and pay my bills. I didn’t really understand what GVEC was all about—at least, not initially.”

As a teen, Gerald recalled, his parents had counseled him to look for work in life that was more than just a job. They encouraged him to seek a career with security, that paid a fair wage, offered benefits and had a meaningful impact on others, while providing the satisfaction of a job well done. Without realizing it on that first day in 1971, the Marion, Texas native had accepted, largely by happenstance, a job that checked off all the boxes.

As he gained experience and came to fully understand what GVEC stood for, the Cooperative’s core values and mission of serving became part of his own identity. What started as a means for supporting his family, ultimately bloomed into a passion for helping others. “I’ve really enjoyed the work, and that’s the biggest reason I’ve stayed all these years,” he said. “Working with the public has been extremely rewarding. I love helping people solve their problems with energy and helping GVEC make a positive impact in the communities we serve.” That passion for serving with the Cooperative has even spread into Gerald’s family, with son Eric now working for GVEC as a line supervisor.

His final two months were bittersweet, of course, filled with tears, laughter, the retelling of old stories, office celebrations and even a commemorative video. Never one to seek the spotlight, Gerald found all the adulation a bit overwhelming but realizes this is how a close-knit family properly says goodbye to one of their own. “I’m so proud to have been part of this organization all these years,” he said, “serving others and building better, stronger communities—just improving lives and making a difference for those we serve. And it’s not like I’m leaving completely. I’ll still be around—here and there. You’ll definitely see me again.”

Farewell to One of Our Finest

We at GVEC can’t think of a more fitting time to mark Gerald’s departure than National Co-Op Month 2020. As an employee who’s seen almost 50 National Co-Op Months during his tenure, he has exemplified the Cooperative spirit in a way that makes everyone at his Cooperative proud. We say goodbye with heavy hearts but also with joy and excitement for what lies ahead for him in this exciting new phase of life. Gerald is a great example of our overall GVEC employee family—both now and throughout our eight-plus decades of serving. It’s a family that practices the enduring cooperative tradition of neighbor helping neighbor to make a positive difference in people’s lives. We wish you all the best, Gerald.